If you are determined to undergo Lasik or any other refractive surgery, know the contraindications. If you have the following conditions, issues or situations, do not get involved with refractive eye surgery:

A few points to consider prior to LASIK

LASIK complications are the unanticipated events that can take place months or years after the LASIK is done. These complications include:

Many of the complications that LASIK patients have experienced have an indirect cause and effect relationship. For example, many patients who have undergone LASIK have experienced retinal-vitreous problems such as retinal and vitreous detachments, retinal tears and floaters months or years after having undergone LASIK surgery. To better understand why these complications can take place due to LASIK, it is best to briefly discuss the procedure itself.

Phase 1: Flap Creation. It is thought that the increase in the eye pressure during the creation of the flap creates a mechanical force or stress on the eye which may encourage damage to the retinal tissues. Thus, LASIK can be thought of as a trauma to the eye in the form of increased intraocular pressure. Normal eye pressures are 20mm Hg or less. During the formation of the LASIK flap, intraocular eye pressures can reach up to 100mmHg. This increase in the intraocular pressure results in a greater ocular wall tension than many myopic eyes can tolerate. This increased ocular wall tension may cause breaks in the retinal-vitreous membranes and cause other ocular damage as well.

Phase 2: During photoablation of the stromal bed, acoustic waves are created which may create damage to the vitreous and retina. Pulsed ablation of the stromal bed by the laser sets up acoustic stress waves along the axis of the eye. These “shock waves” travel from the anterior segment of the eye to the posterior segment. It is thought that these “shock waves” may be responsible for creating disruptions in the deeper ocular membranes of the eye.

In addition to LASIK, the other principal refractive surgical procedures being done are PRK, LASEK and Epi-LASIK. I will not go into the differences between these procedures, but understand that there are significant risks with all of them. My recommendation to a post-LASIK patient with complications is not to undergo an enhancement or another surgery. If another surgery is suggested, at least get one or two additional opinions.

For patients suffering loss of vision and comfort due to LASIK, a scleral lens is the non-surgical treatment of choice. A scleral lens is a large diameter lens made of a highly oxygen permeable material. It does not move on the eye. It is not a contact lens since there is no contact between the lens and the cornea. A scleral lens vaults over the compromised cornea and rests on the white portion of the eye (the sclera). A liquid reservoir exists between the back surface of the lens and the front surface of the cornea. Comfort and vision is almost always excellent. A scleral lens in effect replaces the cornea as an optical surface. The dry, distorted cornea under the lens no longer plays a part in how a post-LASIK patient will see. A scleral lens, when fit correctly will provide stable, clear vision in bright and dim light environments.

This patient underwent Radial Keratotomy surgery in the 80’s and Lasik surgery in 2000. Three weeks ago she underwent cataract surgery and developed corneal hyrops. She is being treated with multiple eye drops to clear up her cornea. If it does not clear up, she will need a corneal transplant. 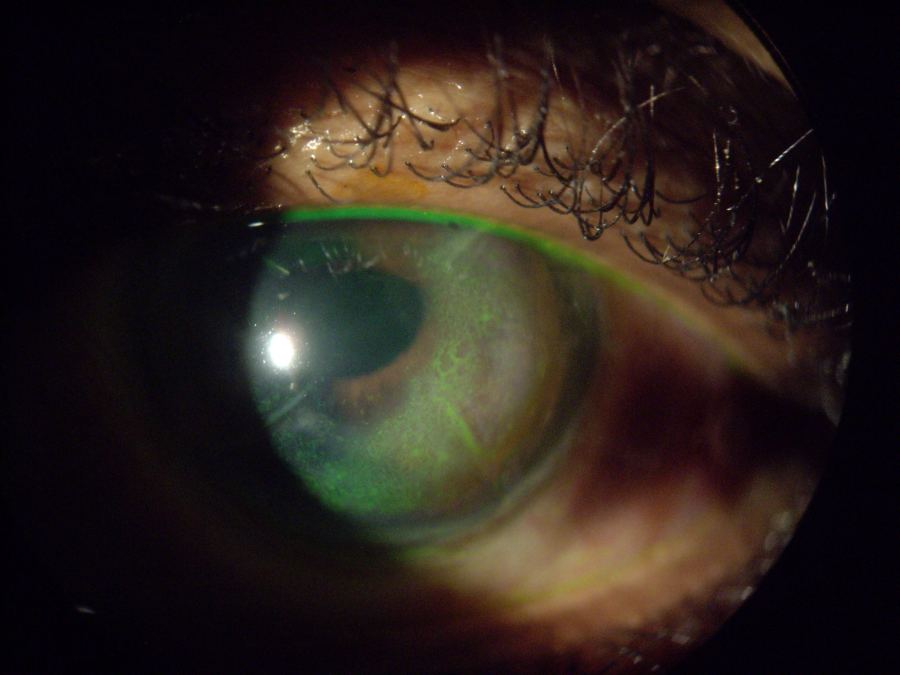 What you are seeing below is a ruptured Desemet's membrane. Internal ocular Fluids have entered the cornea, causing cloudy vision.

In this video, Dr. Oz speaks out about lack of safety with LASIK, noting that half of patients are back in glasses in just a few years.

Dr. Morris Waxler led the clinical trials at FDA when LASIK was approved. Dr. Waxler now says on his website, HelpStopLasik.com, that the Lasik industry deceived the FDA about the safety of LASIK. It's not a matter of choosing the right doctor. Lasik is simply unsafe in any circumstance. In the videos below, he is interviewed by prominent news organizations:

In addition to being an eye care provider, under the direction of Dr. Edward Boshnick, The Global Vision Rehabilitation Center is also a teaching resource for contact lens specialists visiting us from all parts of North America. At the present time, Dr. Boshnick is adjunct professor of contact lenses at the following Optometry colleges: