Give FDA Authority over All Medical Device Ads? By Jim Dickinson

Historically, U.S. law has given the Federal Trade Commission (FTC) primary authority to regulate the advertising and other promotion of prescription medical devices not otherwise "restricted" by FDA.

Restriction most commonly occurs in the conditions of approval stipulated in writing by FDA at the time of PMA approval, leaving the overwhelming majority of Class I and II devices unrestricted and therefore subject only to FTC, and thus scant, regulation of their advertising and promotion.

This is in stark distinction to other FDA-regulated prescription medical products, primarily drugs and biologics, which are unequivocally regulated in their promotional activities by FDA.

In practice, this has meant that the advertising and promotion of prescription drugs and biologics have been much more closely regulated than the marketing claims commonly made for most medical devices.

Lacking the in-house scientific backup that FDA has, FTC's interest in medical devices has been minimal, a neglect that many Washington device lawyers justify by citing a fundamental difference between devices and drugs: the former's characteristic ongoing and frequent design and materials change throughout the product life cycle, versus the latter's static adherence to the formula, ingredients and indications as approved by FDA.

Arguments that there should be a public safety-based regulatory consistency for both categories of medical products frequently get short shrift from legal scholars.

But consider the case of hyper-advertised LASIK excimer lasers, which are "unrestricted" Class III devices and are therefore in FTC's regulatory bailiwick, where they enjoy an unrestricted advertising world of bright-eyed people who've thrown away their glasses forever after what the ads portray as a quick and easy, painless procedure with a high-tech laser.

In sunny world of LASIK marketers, a dark underbelly

Enter “LASIK” into your favorite search engine and you'll open a sunny advertising world of bright-eyed people who've thrown away their glasses forever after a quick and easy, painless procedure with a high-tech laser. But listen to an unlikely dissident duo—the FDA branch chief who approved the machines and a Harvard ophthalmology professor who has studied their effects—and you'll glimpse the dark underbelly of regulatory negligence, an alleged LASIK adverse event rate that's 20 times higher than FDA accepted when the lasers were approved, and professional ophthalmology journals that won't publish a word about it. Last week, the former FDA branch chief, Morris Waxler, asked FDA to reconsider its denial last month of his petition to ban these devices. LASIK (laser in-situ keratomileusis) is a heavily advertised, wildly popular in-office procedure in which a U-shaped flap is cut in the surface of the cornea over the iris, the underlying tissue shaved with an excimer laser, and the flap folded back in place. The flap never heals, and is always prone to dislodgement and infection in sporting activities and accidental trauma, critics say. Waxler, who led the review team that approved the first of these lasers for LASIK in the late 1990s, was content with the decision until 2004, when a volatile and outraged Florida microjet salesman, Dean Kantis, found Waxler in retirement. Kantis operated several flamboyant websites and belonged to a large network of other injured LASIK patients. There had been no patient-informed consent in any of their procedures, he claimed; an FDA-required, product-specific patient information brochure was not being routinely given to LASIK surgery candidates. Kantis connected Waxler to other injured patients around the country. At first the retired FDA veteran was wary, but he gradually became intrigued. “It took me two years to realize something was going on that I needed to pay attention to,” he remembers. He began a five-year journey of rediscovery, interviewing severely injured LASIK patients (including the mother of a patient whom she said committed suicide due to his LASIK injuries) and re-analyzing industry data on which he had relied to approve the devices. Finally he petitioned FDA to ban the devices in 2011. Waxler's conclusion: the laser makers had submitted fraudulent data to FDA attesting to a less-than-one-percent incidence of post-operative adverse events, whereas his re-analysis showed an incidence of more than 20%. On this basis, the other 80% have no problems. Meanwhile, Harvard Medical School assistant clinical professor of ophthalmology Perry Rosenthal had come to a parallel conclusion about LASIK adverse events. Rosenthal had identified and studied 21 patients who developed “unrelenting agonizing” eye pain following LASIK surgery, pain that had persisted for 2-15 years at the time of the study. The pain was so devastating and resistant to treatments that most of these patients admitted to thoughts of suicide. Rosenthal also discovered that the onset of this “neuropathic” eye pain was delayed in the majority of these patients, sometimes for many years after their eyes had healed and were comfortable. This type of pain had not been reported in the medical literature and because these eyes typically looked normal, the sufferers had been accused of exaggerating or fabricating their suicide-provoking pain. Nevertheless, his paper detailing these findings was rejected by two peer-reviewed ophthalmology journals, and Rosenthal says he was forced to post it on his nonprofit website to avoid it being buried. He estimates there are 800,000 LASIK procedures every year worldwide and the available pool of surgical candidates is growing by 2 million eyes per year. Rosenthal's next step was to send his paper to FDA, despite being warned that the agency would not respond. “I didn't believe it,” he says now. “I was wrong. I sent the paper twice without it even being acknowledged. Of course they could always say that the paper has no standing because it had been rejected.” FDA not only blew off Rosenthal's study, it also blew off Waxler's petition. After a 30-month delay, he finally learned last June that he had “not met the statutory standard for [market] withdrawal,” and that furthermore, the agency did not believe his request for a public health advisory with a voluntary recall was warranted. FDA told Waxler that his allegations that laser manufacturers had withheld and distorted safety data in their marketing applications and had pressured FDA to classify post-LASIK surgery glare, halos, dry eye and night driving difficulties as “symptoms” instead of the more serious term “adverse events” lacked sufficient support. On July 22, Waxler plunged onward, filing a petition for reconsideration in which he charged that FDA “grossly underestimates the risks of LASIK by conflating data used to legally support the [marketing approvals] with LASIK industry information used to promote sales.” In doing so, he wrote, FDA had sent two messages: that the LASIK industry could feel secure because “the agency has your back,” and that the public should beware because “FDA does not have your back.” Waxler told the agency that it had “made deals” with the LASIK industry that “degraded the scientific quality of the collection and analysis of adverse event data of LASIK devices.” He listed alleged deals with the following entities: Kremer Laser, American Society for Cataract and Refractive Surgery, CRS Inc., and more than 100 user facilities that he says received IDEs “to study LASIK in order to minimize their exposure to violating off-label rules.” Waxler is sanguine about his chance of changing minds at FDA: “The industry owns them,” he says..

According to the LASIK industry, post-LASIK ectasia is a very rare complication associated with a post-LASIK corneal thickness of less than 250 microns. It is caused by a decrease in the strength of the corneal wall which results in a steeping or bulging out of the anterior surface of the cornea. This event can take place days, months or years after the LASIK surgery. Post-LASIK ectasia is characterized by a rather sudden or rapid loss of vision in association with significant changes in the corneal topographies. The steepening of the cornea can take place in a very short amount of time. Many LASIK surgeons will want to perform invasive procedures such as intrastomal corneal rings (Intacs) to treat this condition.

I have examined well over a hundred post-LASIK patients suffering from this condition. Although it is not a common event, I don’t feel that it is rare. In addition, the progressive steepening of the cornea is short lived usually lasting a few weeks. In my opinion, I don’t think that any invasive procedures should be done to treat post-LASIK ectasia as additional procedures can produce unanticipated events. The best way to treat a patient with post-LASIK ectasia is to fit the involved eye(s) with a gas permeable scleral lens. It has been my experience that several weeks to a month following the onset of the LASIK induced ectasia, the great majority of eyes will become stable and remain that way for indefinitely.

In this video, Dr. Oz speaks out about lack of safety with LASIK, noting that half of patients are back in glasses in just a few years.

Dr. Morris Waxler led the clinical trials at FDA when LASIK was approved. Dr. Waxler now says on his website, HelpStopLasik.com, that the Lasik industry deceived the FDA about the safety of LASIK. It's not a matter of choosing the right doctor. Lasik is simply unsafe in any circumstance. In the videos below, he is interviewed by prominent news organizations: 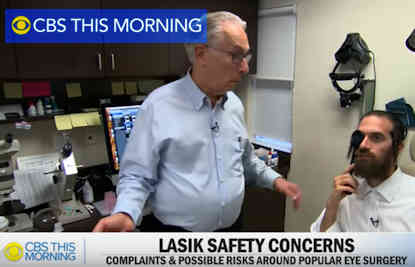 In addition to being an eye care provider, under the direction of Dr. Edward Boshnick, The Global Vision Rehabilitation Center is also a teaching resource for contact lens specialists visiting us from all parts of North America. At the present time, Dr. Boshnick is adjunct professor of contact lenses at the following Optometry colleges: